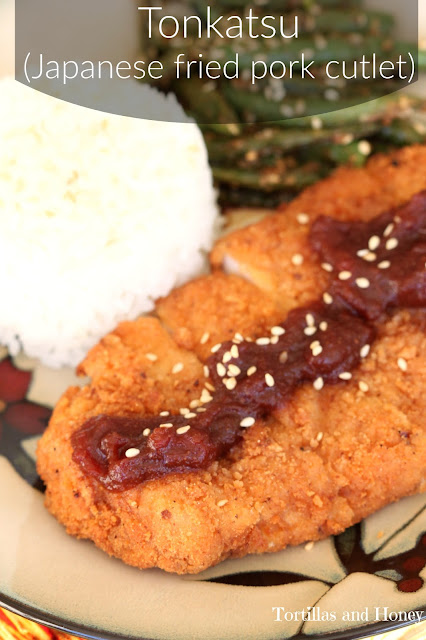 This week, bloggers along with myself are celebrating the release of Masaharu Morimoto’s new cookbook “Mastering the Art of Japanese Home Cooking” with a #Japanese HomeCooking Blog Party, which is being sponsored by authors of The Book Club Cook Book.

Morimoto acknowledges that people are intimidated by Japanese cooking and provides tips and encouragement. Morimoto also provides some history of cuisine and his relationship with Japanese food. Japanese food incorporates different cultures into its cuisine and they love to do renditions of different types of food, which you can see reflected in his book. 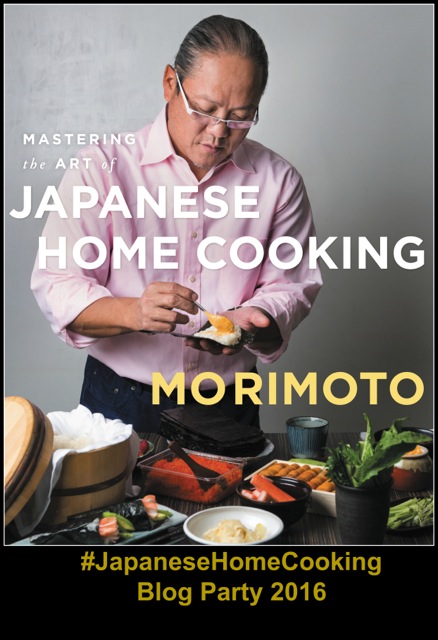 I love that Morimoto shows his readers how to make the perfect white rice. Even though I’m part Chinese and Filipino, I’m not that good at making rice. Until now. While I thought the secret was rinsing the rice until the water runs clear (which is part of it), I think the real secret is letting the rice dry out after rinsing and before cooking. I can now make a pot of rice that I can be proud of, which isn’t mushy or sticking to the bottom of the pan!

While Morimoto considers rice to be a staple in his cookbook, I also would like to add dashi or kelp dashi as a staple to his cookbook. Several of his recipes use dashi, which only takes about 15 minutes to make and I’m looking forward to learning how to make it so I can cook my way through the book.

For this post, I was debating between two recipes, tonkatsu or the Japanese-style curry, because both recipes bring back fond memories! But I ultimately decided on tonkatsu because of the ease of the recipe and lack of time as I was preparing to leave for vacation.

I grew up eating Japanese-style curry, which my parents used to make and Morimoto’s recipe is nearly the exact recipe I grew up with. Because my dad is from Hawaii, he grew up eating this curry and so I grew up eating this curry. Hawaii, like Japan, is influenced by many different cultures in its cuisine. The only reason I decided against making this recipe is that it calls for curry-roux blocks, which contain wheat, and I did not have the time to make this recipe gluten-free before I left on vacation. I was able to find Japanese curry powder, which I plan on using to adapt this recipe in the future so that it’s gluten-free.

Tonkatsu was my favorite meal while visiting Japan 10 years ago (along with Japanese ramen). One of my best friends, Nicole, and her now husband, Lucas, both lived there for two years and I was fortunate enough to get the opportunity to visit them for a week and a half. They introduced me to tonkatsu my very first day and we ate it nearly every day I was there. The sauces were all slightly different, but my favorite restaurant was where we could choose the types of sauces and crush our own sesame seeds. You crush sesame seeds in this recipe, which reminds me of my visit to Japan. You can even provide your guests a mortar and pestle for them to crush their own seeds and add as many as they’d like! It’s a simple interactivity with your food that makes it a little fun.

What I like about tonkatsu is that while the recipe itself isn’t really versatile, you can use the fried cutlet in other recipes. Morimoto uses leftover tonkatsu in his Katsu Don recipe, which is a pork cutlet and egg rice bowl. And while I was in Japan, one of the restaurants we went to poured Japanese-style curry on the cutlet with rice instead of serving it with tonkatsu sauce. For this recipe, I used gluten-free all-purpose flour and gluten-free panko breadcrumbs and it was very successful!

My only wish for this cookbook is that the steam and stir fry sections were a little bit longer because they only contained three or four recipes. But that’s my only complaint, if that can even be considered a complaint.

Please check out the rest of the #JapaneseHomeCooking Blog Party to see what other bloggers are contributing for this cookbook! 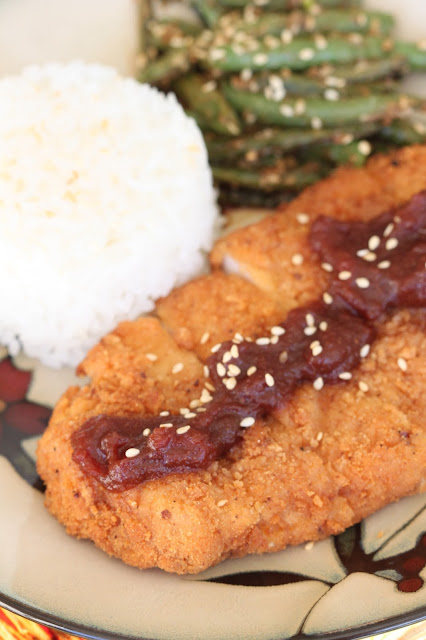 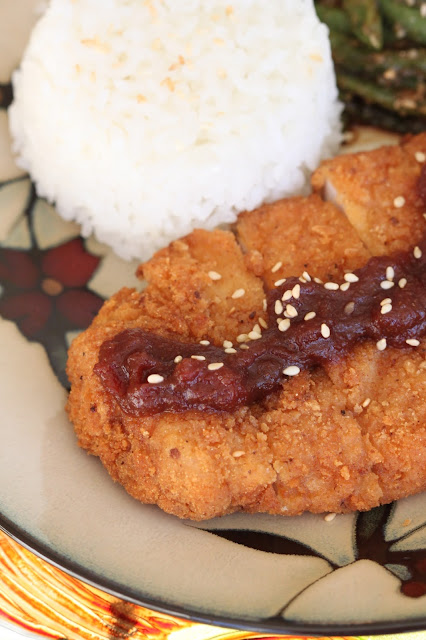 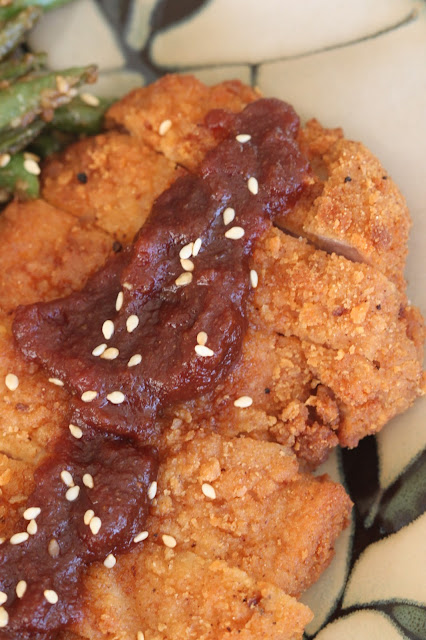 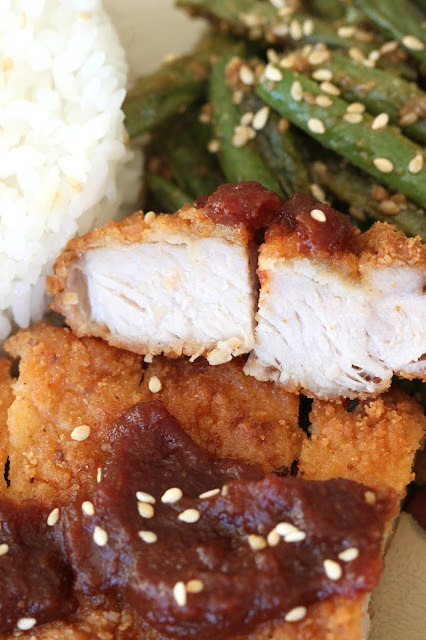 For the cutlets:
Pour about 2 inches of vegetable oil into a medium pot and set it over medium-high heat until the oil reaches 350 F on a deep-fry thermometer.

Use the tip of a sharp knife to score the cutlets, making about a dozen short, shallow cuts all over each side. This keeps the cutlets from curling when they fry. Season both sides lightly with salt and pepper.

Put the panko, flour, and eggs into three separate wide bowls. Working with one cutlet at a time, add it to the flour and turn to coat it, shaking off any excess. Transfer it to the egg and turn to coat, letting any excess egg drip off. Finally, transfer it to the panko, turning to coat well and piling on some of the panko and pressing lightly with your hands. The goal is to get as much panko to adhere as you can. Transfer the breaded cutlets to a plate and repeat with the remaining cutlets. Discard any leftover flour, egg, and panko.

Soak the cabbage in icy water for 10 minutes and drain well.

Just before you fry, stir the oil well. Fry the cutlets two at a time, adjusting the heat it necessary to maintain the oil temperature and turning the pieces over occasionally, until the cutlets are golden brown and crispy, 5-6 minutes. Transfer to paper towels to drain and fry the remaining cutlets. Let the cutlets rest for a few minutes, then cut them into 3/4-inch slices and serve with cabbage, lemon, and sauce for dipping.

For the tonkatsu sauce:
Put the sesame seeds in a medium pan, set over medium heat, and toast, stirring and tossing frequently, until thy're a few shades darker, about 3 minutes. Transfer them to a bowl and let them cool.

Combine the remaining sauce ingredients in a small saucepan, stir, and set over medium heat. Bring the sauce to a simmer, lower the heat to maintain a gentle simmer, and cook, stirring occasionally, until the flavors come together, about 10 minutes. Season to taste. Transfer the sauce to a bowl and let it come to room temperature. It keeps in the fridge for up to 1 week.

When you're ready to serve, pound the seeds to a powder in a mortar or grind them in a spice grinder and serve in a bowl at the table, instructing your guests to mix the paste into the sauce to taste.