Happy Friday and welcome to the grand finale of Kabob Week. I hope you've enjoyed it! I am starting off and ending the week with my two favorites. We also took a bit of a culinary tour around the world! We had Filipino, Italian, Asian, Greek, and now American Southern! If you missed part of Kabob Week, here's what we ate this week:

We're ending Kabob Week with Shrimp Boil Kabobs-- it's all the flavors of a shrimp boil in a kabob! We've got corn, kielbasa (I prefer it over andouille), shrimp, and potatoes basted in a mixture of butter, Old Bay, and hot sauce. That's it! So easy and so flavorful, my pictures don't do it justice.

Also, I'm not a leftover person. We had the leftovers and I was in love all over again. :-) And I have plans on remixing this-- I'm thinking maybe trying a shrimp boil stuffed baked potato?

Also, I doubled the original recipe (which is reflected below); the original recipe said it was for two servings, which I don't think it correct. I've also tripled the recipe and cut the skewers in half for a party, which gave me a total of 36 skewers. So you can definitely play with the portions of the recipe.

You need to taste the recipe, that's all I have to say. Over and over again. 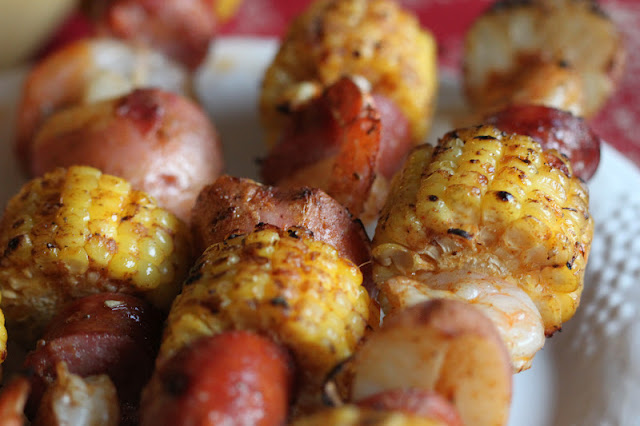 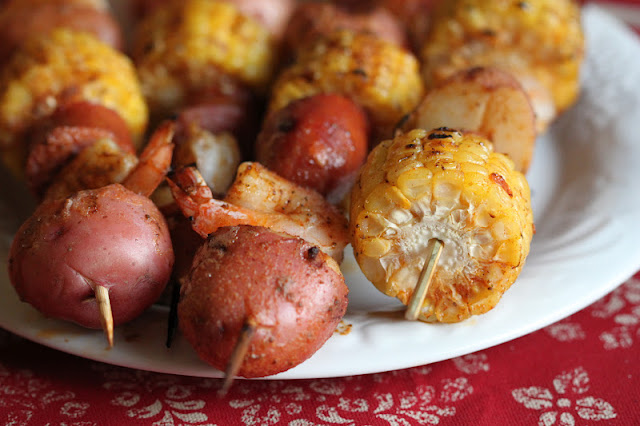 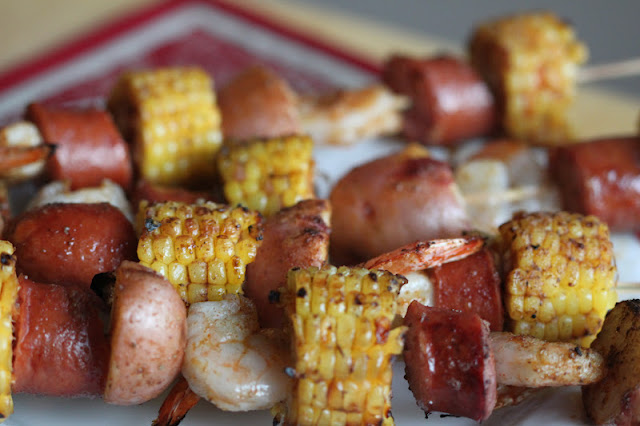 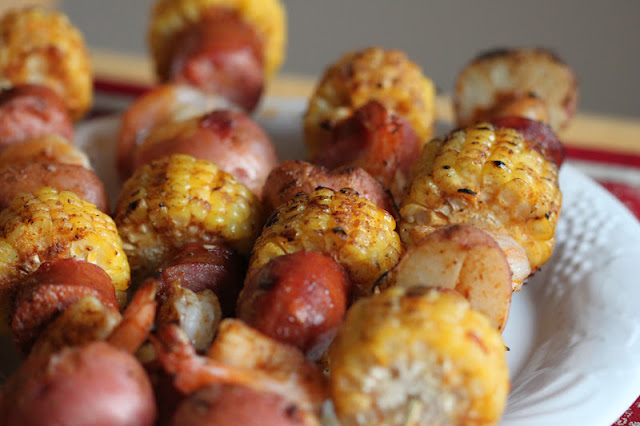 1 lb small new potatoes (the grocery store didn't have these, so I used Red potatoes, either cut in half or in quarters, depending on size)
4 small ears corn, cut into 1 1/2 inch rounds
1 lb. andouille sausage, cut into 1 inch rounds (I used Kielbasa)
1 lb. large shrimp, peeled and deveined
1 stick butter, melted (I've also used Smart Balance for those that had dairy allergies and worked out fine)
8 teaspoons Tabasco
4 teaspoons Old Bay Seasoning

For the corn, I placed them in the microwave (with their husks on) with a damp paper towel. Then microwaved them on high for 4 minutes per side. Then let them cool for a minute, removed the husks, and cut into small rounds. This also helps to skewer the corn a little bit more easily too.

In a small bowl, combine the butter, Tabasco and Old Bay.

Heat grill to medium-high. Clean and lightly oil the grill.  Grill kebabs turning and brushing with butter mixture occasionally until the shrimp are cooked through and corn in starting to char, about 8 minutes.  (The butter mixture does cause flare ups with the grill, so make sure you work from the back of the grill towards you as you're basting the skewers. That way you don't burn your hand! I also made sure I used all the mixture for basting-- it gave so much flavor!)