Happy 4th of July! Okay, one day late but you know how it goes. :-) How did you spend your 4th of July? We went to my brother's girlfriend's family BBQ yesterday. They initially were going to have it in the mountains, but because we're in such a severe drought, they closed all the picnic areas for the holiday to help prevent fires.

So we ended up at Tiff's sister's apartment complex where they had an amazing BBQ/pool area. The BBQ area was set up like an outdoor kitchen, complete with a fridge and sink. If I ever get an outdoor kitchen, it would look very similar to that. It was very impressive! So we had massive amounts of BBQ and spent a lot of time in the pool (complete with sunburns to prove it!). It was a very fun celebration! Tiff and I are even thinking of possibly doing another BBQ/pool get together for our birthdays next month. :-)

These lovely and festive cupcakes were my contribution to the BBQ yesterday. I knew that I wanted to make something with red, white, and blue but instead of trying out a new recipe and playing with disaster, I decided to adapt one of my favorite cupcake recipes-- one cupcake recipe that impresses every time I make it. It's actually a combination of two versions of the same recipe appeared on my blog last year, the strawberry cheesecake cupcakes and the blueberry cheesecake cupcakes.

The flavors are spectacular and these won't stop being my favorite cupcake recipe anytime soon! Definitely make these for your 4th of July celebration!! If you can't wait until next year, make them anyway! Like now, today, tomorrow, this weekend-- these never disappoint!! 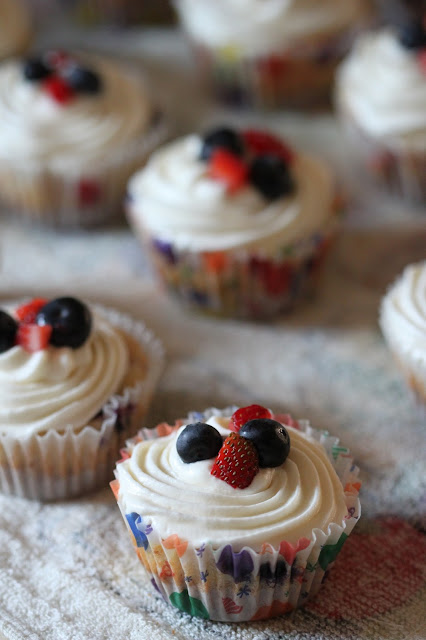 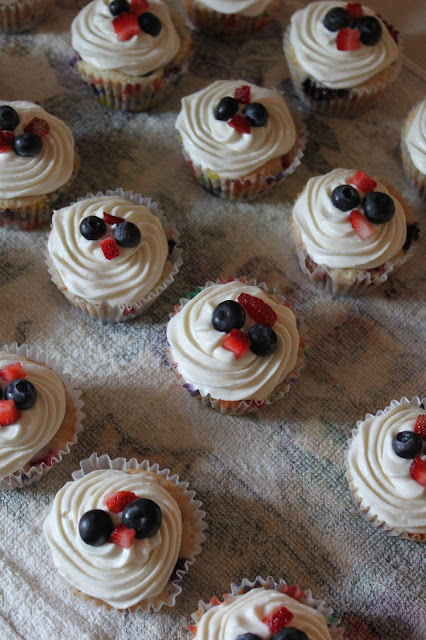 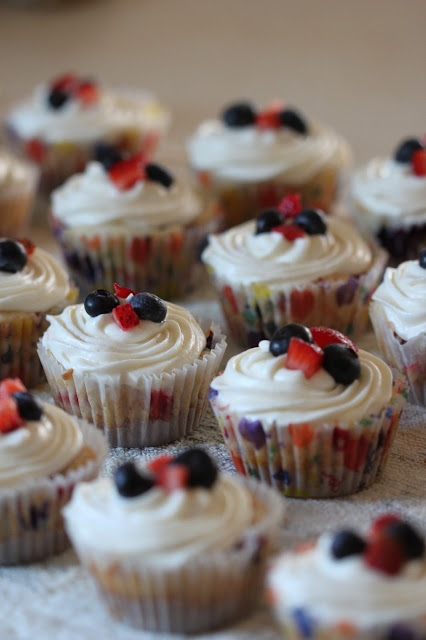 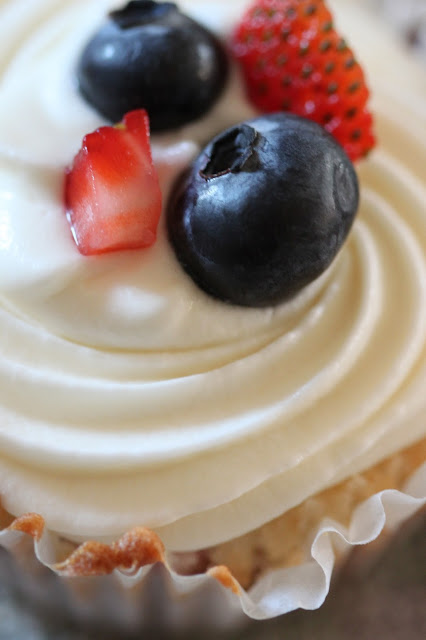 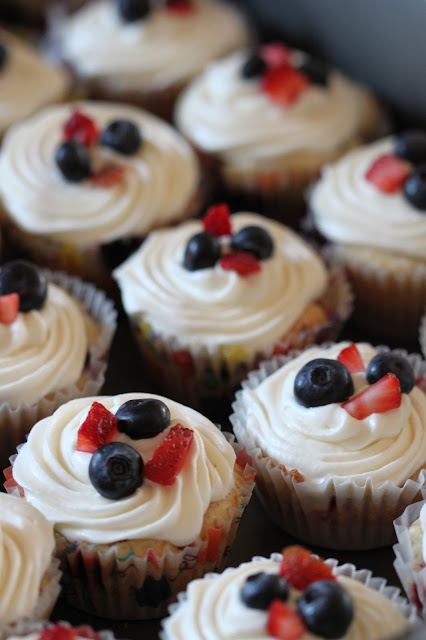 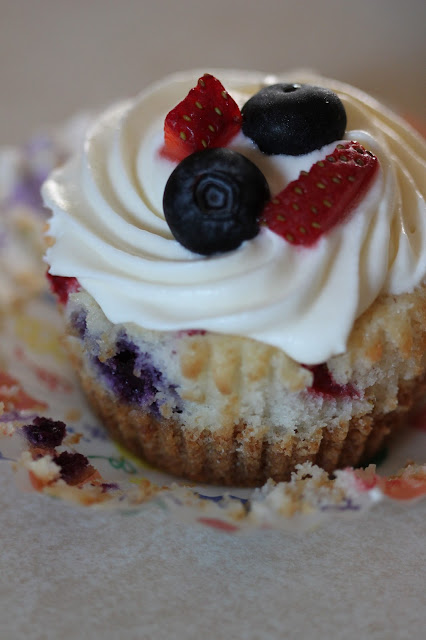 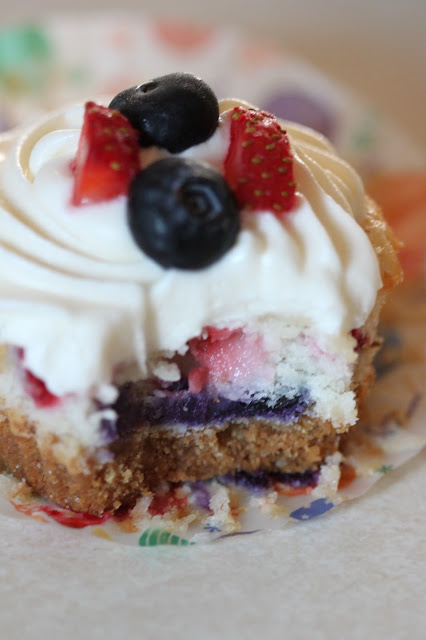 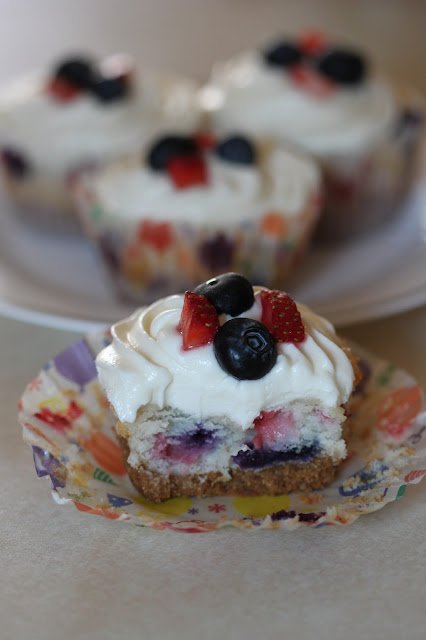 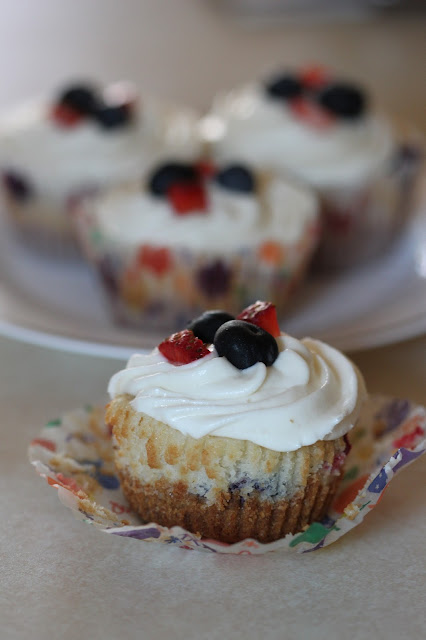 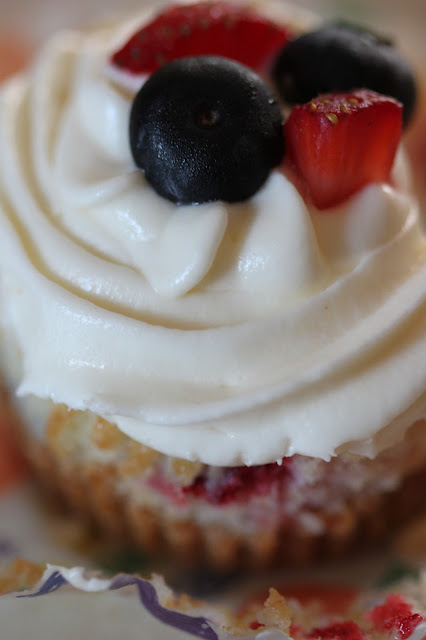 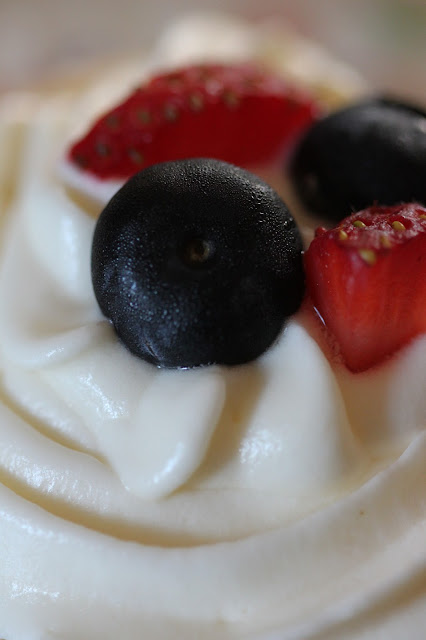 Instructions:
Preheat oven to 350 degrees and line 24 muffin tins with cupcake liners. Mix graham cracker crumbs, 2 tablespoons of sugar, and melted butter together in a medium bowl until all the ingredients are completely incorporated. Sprinkle the graham cracker mixture evenly into the muffin tins, about 1 tablespoon of the crushed graham cracker into the bottom of each prepared muffin tin. Press down using fingers and bake for 3-5 minutes or until slightly browned. Remove immediately from oven and set aside to cool.

Gently fold 1/3 of the egg into the batter until combined, do not over mix the egg whites or the cake will fall flat. Add remaining egg. Fold in the blueberries and strawberries into the batter. Fill each muffin tin about 3/4 of the way and bake for about 20 minutes depending on your oven. You can test to see if they are done by sticking a toothpick through the center, if it comes out clean it is ready to take out!

For the cream cheese frosting:
In a large mixing bowl, beat the cream cheese, butter and vanilla together until smooth. Add the sugar slowly in small batches, beating on low speed until incorporated. Once all sugar has been added, increase the speed to high and mix until light and fluffy. Refrigerate for 1 hour. After one hour, spread icing on cupcakes or use a pastry bag with a star tip. Garnish with two fresh blueberries and two pieces of diced strawberry in the center and refrigerate until ready to serve.